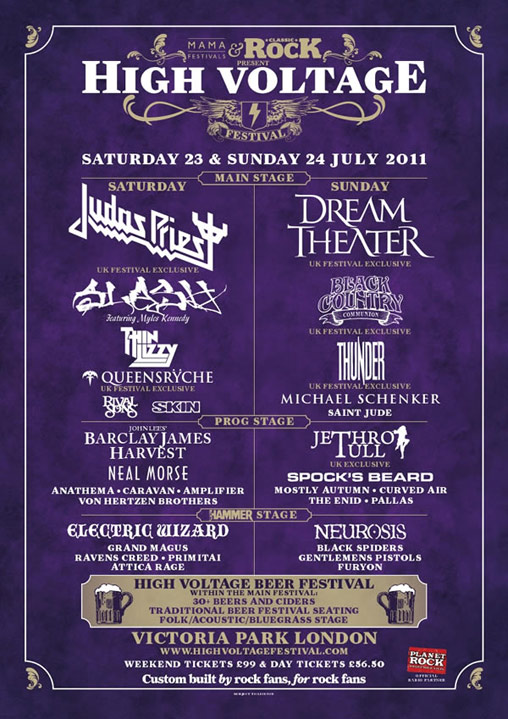 Heavy metal icons JUDAS PRIEST headline the festival on Saturday 23 July where they will play their last EVER UK festival show, 31 years after they made their festival debut at a legendary Monsters Of Rock.

Prog-metal behemoths DREAM THEATER, meanwhile, top the bill on Sunday 24 July where they will perform a UK exclusive festival set, and give a UK debut to their as-yet-unnamed drummer following the departure of Mike Portnoy a couple of months ago.

THUNDER will reunite for a special one-off gig at the festival following their split in 2009 - it will be a rare opportunity to see Danny, Luke and the guys back on the stage where they belong

BLACK COUNTRY COMMUNION and JETHRO TULL will also play UK festival exclusive sets at this year's High Voltage Festival, while MICHAEL SCHENKER will line up on the Main Stage.

SKIN and our favourite new band RIVAL SONS are on the Main Stage bill, while JOHN LEE'S BARCLAY JAMES HARVEST have been named as the headliner of the Prog Stage on Saturday 23 July. AMPLIFIER and VON HERTZEN BROTHERS also play the Prog Stage along with CARAVAN, PALLAS, SPOCK'S BEARD, MOSTLY AUTUMN and THE ENID

Once again the festival will feature three specially curated stages to cater for fans of all genres of rock, and once again High Voltage will take place at VICTORIA PARK in London.

And here's a little something else just for Planet Rock listeners.

Anyone that buys tickets for the festival through the link below will get a voucher for 10% off Planet Rock merchandise at our stand at the High Voltage Festival* next summer.

Following the success of last year’s Real Ale tent, 2011 sees the very first High Voltage Beer Festival, where you'll find over 30 real ales and ciders from local brewers, and you’ll be able to get a proper pint of Guinness too!

Set in the heart of the festival site, this area has been designed to please the real ale connoisseurs out there, the Beer Festival will have it’s own area with traditional bench table seating in a marquee that will have one side open with seating inside and out, delicious gourmet food will be available

Festival goers will be able to see the EVEL KNIEVEL EXHIBITION on site.

The tour is set to inspire fans and families to "Dare to Dream” – Knievel was the daredevil who aspired to entertain and show nothing is out of your reach. Now parents and their children will get the chance to see his famous Harley Davidson Jump Bike which crashed in a jump over a tank of sharks, the X-2 Sky Cycle from the Twin Falls, ID – Snake River Canyon, the Wheelie Dragster Car, and of course the instantly recognisable blue and white leather suits (with the real scuffs from crashes) in the exhibit plus lots more !

Also on the "menu" so to speak is the fantastic ACE CAFE LONDON which will once again provide some respite from the hard rocking that festival patrons are sure to be doing.

When you need a break from the main stages to refuel, this will be the ideal area to sit, eat and drink whilst listening to great music in an environment brought to you by the Ace Café London team.

High Voltage 2010 saw headline performances from ZZ Top and ELP in what was one of the live music highlights of recent years.

Glorious weather combined with one of the finest musical line-ups at any festival anywhere in the world in 2010 gave us a genuine rock n roll mecca in deep East London.

We saw stunning performances from the likes of UFO, Foreigner, Joe Bonamassa and Asia, while the Heaven & Hell tribute to Ronnie James Dio left not a dry eye anywhere in the arena.

This was a rock festival as it was supposed to be done, custom built by rock fans for rock fans - bring on 2011.

* Vouchers can only be redeemed at High Voltage 2011 at the Planet Rock stand on site. It is non-transferrable. The voucher will be sent via email in the weeks prior to the festival.